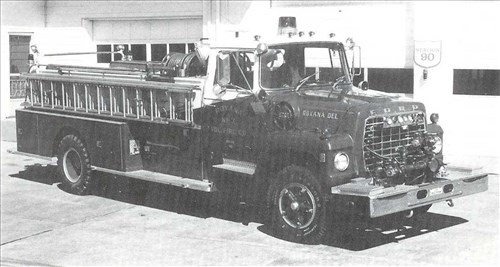 During 1959 the main topic of discussion at Wilson's Service Station was the need for a Fire Company in our little community! The early dreamers such as Norman Lynch, Bill Hipple, Vaughn Lynch and Wilson Wilgus, spent many hours around the stove discussing how to start such a venture. After several suggestions, by many interested members of the town, it was decided to try and hold a meeting in the Old Knights of the Golden Eagle Lodge Hall No. 16. Wilson Wilgus spent hours on the phone calling men in the community to encourage them to attend this meeting.

On February 12, 1960, thirty-three interested men were present for the first meeting. After much discussion on the needs of the community, it was decided to appoint temporary officers and form the Roxana Volunteer Fire Company.

A Ways & Means Committee was appointed to sound out to the community, for donations to start a Volunteer Fire Company. The Members of that committee were George L. Bennett, III, Preston A. Hudson, Roland Ennis, and Reese Hickman.

$230 was collected in membership dues during the first meeting.

During the next month, 46 men paid ten dollars dues to become charter members of the Roxana Volunteer Fire Company.

The minutes reveal that on March 16, 1960, the Bylaws Rules & Regulations were drawn up and approved. On the 28th of March, a certificate of incorporation was filed in the office of the Secretary of State.

The first elected officers of the Roxana Vol. Fire Co., Inc. were:

During the meeting of April 6, 1960, a committee was formed to hold a rummage sale as the first fund raiser for the Company. People donated anything they cared to, furniture and appliances of all types, farm machinery, tools, you name it and they collected it. At this time Walter Wimbrow offered the use of the Old Roxana School in which to hold the sale. The members immediately starting filling the building with donated items. A huge scrap iron pile was started behind the building. Wilson Wilgus donated his wrecker and Sunday afternoons were spent hauling in every junk car that could be found. The pile grew to a small mountain of scrap metal and junk of all descriptions.

The Fire Company was still holding meetings in the Lodge Hall. At this time a motion was made and passed to purchase the Old School House from Walter Wimbrow for $2,000. At the same meeting it was decided to purchase a 1939 GMC pumper from Indian River Fire Company for $1,300, to be payed over a period of nine months. Roxana Volunteer Fire Company, Inc., the beginning....

The members started working on the building to get it ready for the Fire Engine. A section of the floor was removed and a hole cut in the wall to form the first truck bay. Endless hours of labor were donated.

Mr. Earl Baker, a local auctioneer donated his service for the Rummage Sale held May 7th, 1960. A total profit of 330.66 was earned from the auction plus $350.00 for the scrap iron pile. The first fund raiser had truly been a success; it was the first of many more to follow for the dedicated, determined firemen. In those early days, anything to raise money was tried. They had bake sales, rummage sales, car washes, raffle ticket sales for a lawn mower. A lunch wagon attended the local Saturday auctions to serve refreshments.

The first meeting held in the Fire Hall was June 1st, 1960. In less than four months, the Company had a Fire Engine, a Fire House and a $3,000 note held by The First National Bank of Frankford. The skeptics became believers.

It was about this time that Louis (Birddog) Lynch made the statement about the Fire Truck, "It's red and has a siren." This was so true and we were so proud, but it also had 400 feet of one and one-half inch hose, plus 200 feet of one inch booster hose, with six complete sets of turn out gear. The records show it cost $50 per man for the turn out gear.

A used siren was purchased for fifty dollars and installed on top of the fire house. It was decided to blow the siren each day at noon, (except Sunday), to keep the local chickens accustom to the loud noise. The siren has continued to blow each day at noon for this purpose.

In September 1960, Fire Chief Preston A. Hudson resigned and George L. Bennett, III was elected to finish Hudson's term. November brought our first water system to fill the Fire Truck. A used 1000 gallon fuel tank was purchased from Magee Oil Company, Berlin, MD, to be installed on three cement block pillars 8 foot high. The tank would be kept full by an electric water pump. The water could be drained into the truck by gravity.

In those early days, you could contact the company by calling Wilson Wilgus, Chester Lynch or Medford Justice. Wire was laid to these three homes so they could blow the siren in time of need. Then they would have to go to the station to tell the arriving firemen the location of the fire. The members were attending fire school one night a week, In the early days these schools were held at Millville and Frankford Fire Halls.

February 1, 1961 was a day to remember in the history of the company. On this date it was decided to order the first new fire truck. The new GMC Fire Truck was ordered from American Fire Apparatus Company of Battle Creek, Mich. The chassis would be furnished by Wilson's Motors of Georgetown, Delaware. The total cost of the new engine was $13,274.00. The money was borrowed from The First National Bank of Frankford.

In December 1963, the purchase of two used milk trucks from Rehoboth Dairy Co. for $210 would be made into the first Rescue Truck.

February 1, 1964, the first dance was held in the fire hall. The price: one dollar per person.

In July 1965, we received a used 1956 GMC Army Surplus truck from Civil Defense, along with a 1800 gallon fuel tank used in U.S. Air Force fuel transport planes. By putting the two together, Roxana had its first tanker.

On November 12, 1966 the firemen honored the Ladies Auxiliary with the company's first Ladies Night at the Carousel Motel, Ocean City, Maryland.

The minutes show that October 16th, 1968 a motion was made to purchase the first new rescue truck, In November, the company voted to construct the first addition to the Fire House, The addition was a 30' by 48' two door bay to house equipment. The new addition was completed in September 1969.

In June of 1970, it was decided to purchase a new Ford Pumper built by American Fire Apparatus. This was the second new engine purchased by the company. The cost of this truck was $25,325.91. The truck was put into service May 19, 1971.

During 1972, new Aluminum Siding was installed on the Old School House section of the Fire Station.

Maybe it was Spring Fever, but the month of June 1973 was a very active month for the company. During this month motions were made and passed to purchase a new Rescue Boat to be used for water rescue. A new 4 x 4 pickup to be rigged with a 250 gallon tank to light field and woods fires, and a tractor & trailer tank truck that would be capable of hauling approximately 8,000 gallons of water. The company, having no fire hydrants with-in the fire district, was in need of a large tanker. A committee was formed to consider building a new addition on the building.

July 18, 1973 would be a tragic day in the history of the Company. Although we had experience tragedy before with the sudden accidental deaths of firemen Robert W. Wimbrow 1961, Ted K. Wilkerson 1965 and Bruce A. McCabe 1972. This July morning Fireman Jeffery C. Grise was asphyxiated in a fire at his parent's home. Grise had been a member of the Fire Company for two weeks.

The first public celebration of the company was held October 6, 1974, this being an open house for the public to see the new addition and celebrate the same with the members. The company was now 15 years old.

Mr. Vollie Lynch donated a International Van to the fire company in January 1975. This would be made into the first Light Truck.

In July, the State Highway Department installed the traffic control signals in front of the Fire House.

On July 16 it was decided to purchase a 1971 GMC Diesel Tractor to pull the tank trailer since the old tractor blew up on the way to the Lighthouse Diner Fire, in Fenwick Island.

November 5, 1975 would go down in the history of Roxana Volunteer Fire Company as a date to remember. On this date, the first female members would be admitted to the Company. They were Linda Flood, Marie Quillen, and Arlene Johnson.

Marie Quillen is still an active fire fighter and also a Past President of the Ladies Auxiliary. She is the only person in the company belonging to both departments.

In August 1976, Hurrican Belle swept up the Eastern Shore of Delaware. Approximately 300 people were evacuated from the beach area and sheltered in the Fire Station.

In November, a contract was signed with Melvin Blades Construction Company to build a 60' x 100' addition to the building which included a 20' x 60' kitchen and a 60' x 70' dining hall. This is where the Ladies Auxiliary now serve their famous fried chicken dinners. The hall is also used for dances, bazaars, wedding receptions, county meetings, etc.

Darryl Wharton and Mary Jane Townsend were united in marriage on April 1st, 1978. This was a First for the company and maybe a first for the State of Delaware as Darryl and Mary Jane were both fire fighters with the company. They are now the proud parents of a lovely daughter, Megan Wharton, born October 1984.

A new 15 passenger Ford Van was purchased in July 1982 For use as transporation to Fire School, parades, county & state meetings.

1983 brought a giant step forward for the company with the addition of ambulance service for our fire district; fourteen members attended Delaware Technical & Community College in Georgetown for 40 hours of training to become certified ambulance attendants. The Ford Ambulance was purchased from First State Ambulances, Inc. The first ambulance run was November 10, 1983. Since then the ambulance has recorded 245 runs as of December 31, 1984. A much needed service had been fulfilled as the company continued to grow.

Photo of the Day 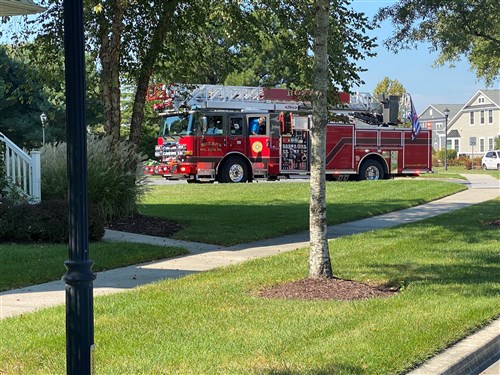